Earlier this year, Rhonda manifested her dream of joining the WildQuest crew and her first week was full of surprises, some bigger than others!  Read on to find out about the encounter she will never forget.

Life can be pure bliss created by the choices we make and the willingness we have to say “hell yes” to this journey called life. Mine to date has been full of hell yes choices and many surreal moments have presented themselves because of this. I’d love to set the scene for a magical, mystical moment that will forever be etched into my heart, my soul and my memory…

As long as I can remember the ocean, the whales, the dolphins and all of the other beauty within the wide open sea has always held a curiosity for me. It wouldn’t be until later in life that the whispers of the ocean would lure me to her vast beauty and, once I experienced her wonder, I was hooked.

Several of my ocean experiences came in the beautiful, warm, crystal clear waters in Bimini, The Bahamas, as a guest with WildQuest. I was always honoured to join with this conscious community of heart-centred people to swim respectfully with the dolphins in their natural habitat. What a joy! My long time desire was to become a crew member with WildQuest and my “hell yes” moment came to manifest in June of 2019.

As crew, I was standing on the roof of the catamaran looking out over the horizon with a pair of binoculars, when off in the distance I saw two fins! With much glee and excitement I exclaimed to Sudi, another WQ crew member, “I think I’ve spotted my first dolphin!” I excitedly called the co-ordinates 3-0-0 to Captain Chris and then asked Sudi to confirm my spotting. With his very distinguished British accent he declared, “those aren’t dolphin fins my dear, that looks like the fins of a shark!” The captain gently guided the catamaran into the direction of the coordinates and, as we glided a little closer, it was determined that this beauty was actually a 30 foot whale shark.

The excitement of the crew and all of the guests was palpable in the air. Silence overcame us as we watched this magnificent beauty float peacefully in the clear blue waters. After some discussion we were given the go ahead and we gently slid in and floated with this magnificent giant of the sea. After what seemed like an eternity I returned to the catamaran and decided to sit on the transom with my feet in the water, on the ladder, and enjoy from a distance.

I was reflecting in awe at the magnificence of this experience, feeling my heart bursting with joy and gratitude, and sending telepathic thanks to the whale shark for the gift of its time, its presence, and its grace. I was subconsciously asking it to be safe in these waters as perhaps not all humans were as respectful as we were.

Then the unimaginable happened… to my utter amazement, just as quickly as my thought was thought, the whale shark left the group and swam directly over to me. It came up to the stern of the boat and seemed to look me square in the eye.

I felt my heart expand and my soul fill. It literally swam with its head inches from me for over five minutes and then laid its head on my feet and I swear I heard it say “thank-you, I will be OK” And as beautifully as it all began, it ended. Forever touched, deeply grateful and a gift we will never forget!

Contact Us!
Office Hours are Monday to Friday from 11am-5pm USA/EST.
Dolphin Gram 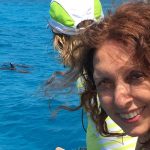 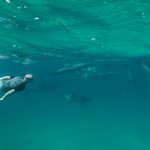